THE 10,000th FIND AT PONTECAGNANO The remains of a 12-year-old boy wearing a warrior's bronze belt have been found at Pontecagnano, an outpost of the Etruscan civilisation in southern Campania. "It's a find of great significance," said archeologist Gina Tomay of the boy, who lived in the IV century BC and was discovered with two ceramic cups at his feet, one for food in the afterlife and the other for the wine that would ensure him a place at the banqueting ceremony called symposium. Boy's remains found in Etruscan outpost in Campania | ANSA 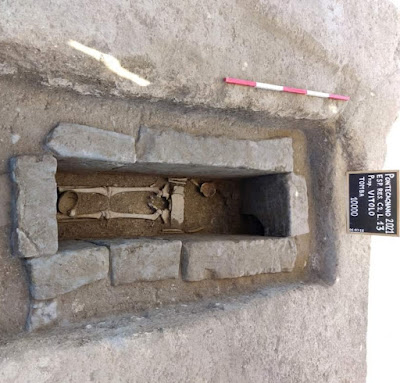 Email ThisBlogThis!Share to TwitterShare to FacebookShare to Pinterest
Labels: PONTECAGNANO