WHERE THE SIBYL DECLARED HER PREDICTIONS The Cave of the Sibyl is a subterranean complex beneath the ancient city of Cumae. The architecture of the cave suggests that it was probably constructed around the 5th century BC during the Greek period. The walls are trapezoidal in shape, separated by six openings that illuminate the cave interior. At the end of the passageway is a rectangular room, that has been proposed as the legendary oracular room. The Cave of the Sibyl | HeritageDaily 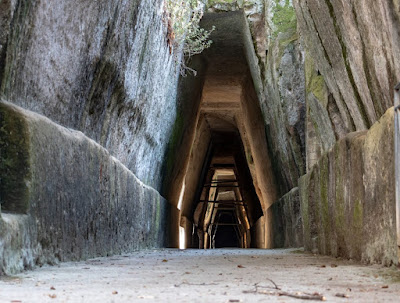 Email ThisBlogThis!Share to TwitterShare to FacebookShare to Pinterest
Labels: CUMAE